In this bonus episode I talk with a writer in the Thriller Genre, who has penned an amazing story full of espionage, tradecraft, violence and politics in the Middle East and the United States. Matt started his writing career later in life after speaking with David Baldacci at a book signing when he asked if he was to old to start writing and he was told the industry could use some young writers. His first novel Surviving the Lions Den introduces the reader into a world that lies just below the surface for not only the reader but for the characters themselves. His second novel The Iranian Deception promises more excitement, violence, and the characters that were loved do much from the first novel. It is a great pleasure for me to not only introduce this writer to you but to also recommend this fantastic story to be introduced into your personal library. Please welcome the guy who said that he could beat friend of the show Don Bentley in 80’s movie trivia. Matt Scott…. 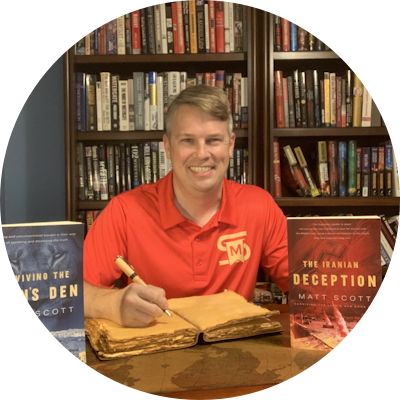 I have BA degree in both Political Science and History from Hampden-Sydney College where I studied under former Director of the Defense Intelligence Agency, General Sam Wilson. Author of three political spy thrillers (SURVIVING THE LIONS DEN, THE IRANIAN DECEPTION, THE AYATOLLAH TAKEDOWN). I currently reside in Charlotte, North Carolina.