This week in the studio with me. A retired Sergeant Major with a combined 29 years of professional service to both the United States Marine Corp and The United States Army. Serving in numerous position ranging from a Scout Sniper to National Security Agency Access operations Officer. He has also conducted operations with SOUTHCOM, CENTCOM, AFRICOM, EUCOM, SOCOM, AND THE FAMED SPECIAL MISSIONS UNIT. His life took a turn after he lost two teammates in a one month time period to suicide. My guest decided that after not being able to make sense of these losses, that it was time to be an example and get help. Fast Forward to life after 2 Stellate Ganglion Blocks and being a team member with the Military Special Operations Family Collabrative, a group that enables the success of SOF Warriors and Families through collabrative health and well being research and programs. He’s here to tell his story of successes and failures, It is my honor to introduce Erick Miyares. 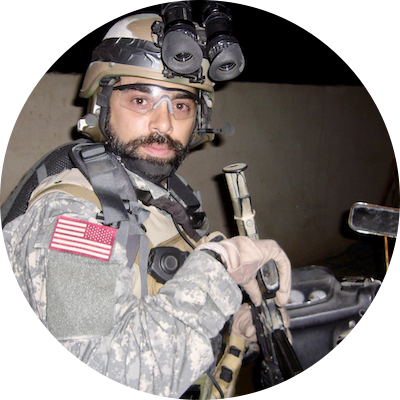 “My family immigrated from Cuba in June 1971. My mom was pregnant with me at the time and luckily she caught the last flight that allowed Cubans to leave under the Castro administration. I say luckily because I would have been raised under very different circumstances from my childhood in Hialeah, FL. I grew up in a good home, but as the child of immigrants I learned very quickly about hard work and humble beginnings. My mom dated a man who took on a stepfather role in my life. He was part of the Bay of Pigs invasion so I grew up understanding the sacrifices involved with serving this country. This is inevitably what drove me to join the Marine Corps and serve this country. I landed on Parris Island on September 12, 1991 and went on to graduate as a Marine infantryman. I went on to become a Marine Scout Sniper and served as part of Joint Task Force Six (JTF-6) counter drug operations on a two-man Scout Sniper element. I stayed in the Marine Corps from 1991 to 1997 before joining the Army. My first wife was going to the Defense Language Institute with the Army which is why I decided to make the switch and go through the program as well. They sent me to brush up on my Spanish before being assigned to 7th Special Forces Group (A). We did a lot of foreign internal defense (FID) missions and support to counter-narcotics operations. I got my first Purple Heart in Ecuador when I was shot on a mission to train Ecuadorian troops in counter narcotics. We were on a convoy and as we went around a bend, there was an insurgent group waiting on the other side of a bridge. We were ambushed on a cliff and had nowhere to go as we engaged with the terrorist group. As I was jumping for cover I was shot in the leg, but we were lucky to get out of there without any further injuries. Shortly after I was accepted to a command in the National Capital Region (NCR), but after 9/11 we never stopped deploying from that point forward until about two years ago.

Everything that happened to me overseas was put into a mental safe. I suppressed everything for 20+ years. I was rapidly falling apart and realized I needed to open pandora’s box for my family’s sake. The catalyst for reaching out for help was losing two fellow operators to suicide one month apart. These were two guys that I was part of their selection process, helped mentor, and deployed with during their time in the unit. I felt like we failed on our watch to identify what was affecting them and provide help. It really hit home. That put me on my knees and in the darkest corner you could imagine. I couldn’t process it and the only thing that made sense was to immediately ask for help and be an example to the others in my unit. That’s when I decided it was time to retire and start unpacking 28 years of PTSD and TBIs, gun shot wounds, moral injuries, fear, etc. My amazing and selfless wife, of 18 years at the time, had endured our entire marriage serving and supporting my time in the unit. Our son, at 15 years old, knew no better than to expect that I was always traveling and training, but never about the constant level of danger in deployments and combat training. It was when he identified that my friends had died from “PTSD” and I admitted it did it all sink in. I reached out to get urgent help when a good friend of mine, Pasha, mentioned Headstrong. I was fortunate to first go through NICoE to unpack some of these major issues, but I would say Headstrong has been life saving because they connected me to a therapist who had experience with Special Operators. She helped me process every issue in an unbiased way that focused on me as an individual. She has been amazing. I’m appreciative of the dark and healing processes I went through because it helped me come out on the other side and have a second chance. I was able to use the tools I received from NICoE and Headstrong because I feel like I have another purpose in life to help prevent veteran suicide. Now that I’ve found my purpose again and got my focus back, I will prioritize my family and continue the journey to heal and grow, while stepping off to another mission of helping others.”